Early in the game, Stephen Gostkowski missed a 46-yard field goal on 4th & 6.

He took one sack, giving the Patriots 253 team passing yards.

Opposing quarterback Jared Goff was 253 days before his birthday:

In Extended gematria, fifty-three sums to 1229

Jared Goff had 229 yards passing. Because of 4 sacks, the Rams finished with 198 yards of team passing:

The 229th verse of Revelation reveals the number of the Beast

Todd Gurley was the only offensive player on either team to share an August 3rd birthday with Tom Brady, who was born on a date with a life lesson number of 35

The leading rusher for the Patriots was Sony Michel, who had ninety-four yards:

The leading receiver for Los Angeles in Super Bowl 53 was Brandin Cooks, who happened to play for New England in last year’s Super Bowl.

Cooks was 131 days after his birthday:

The Super Bowl was played in Atlanta, Georgia

Speaking of 83…Stephen Gostkowski made two field goals of 41 and 42 yards each, totaling 83.

LIII, of course, represents 53. Greg Zuerlein’s only made field goal was 53 yards out:

Remember, the only touchdown of the game was scored exactly 53 minutes into the game, and it gave Running Back Sony Michel 53 rushing yards.

Before the game, Bobby mentioned why 215 was significant to Tom Brady: 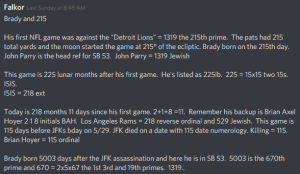 Johnny Hekker of the Rams, who stands 6’5″, broke a Super Bowl record with a 65-yard punt.

If you watch the broadcast, you’ll hear Jim Nantz mention Philadelphia right before the play.