Going into the game, I thought Chicago was going to come out on top over the Philadelphia Eagles. I wasn’t terribly confident – the riddle almost seemed too obvious.

Chicago sums to 46 in the alphabetic order:

In 1985, 46-year-old Mike Ditka led the Bears’ legendary 4-6 defense to a win in Super Bowl XX with 46 points over the Patriots

The Bears’ playoff matchup against the Eagles was their 46th all-time head-to-head game. It fell exactly 406 days after their last game:

And the date had Full numerology of 46

The player everyone was talking about after the game was Bears’ kicker Cody Parkey, who missed the game-winning field goal as time expired. He was a span of exactly 46 weeks after his birthday: 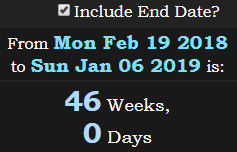 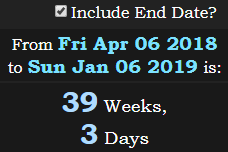 Internationally, the date written 4/6 is June 4th. The game was played a span of exactly 150 days before that date: