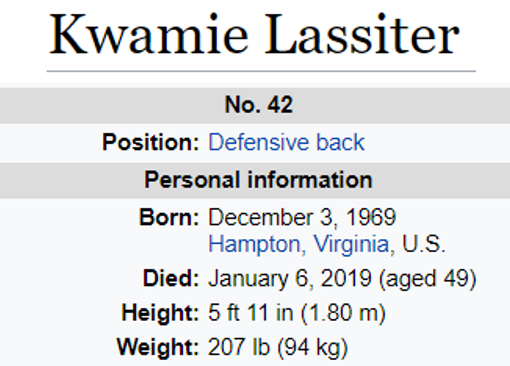 As I commonly document, 13 is a number of sacrifice.

The name Lassiter sums to 103

He played most of his career with the Arizona Cardinals – A.C. = 1-3

He also played for the Chargers, who won a playoff game on the same day he died. The Chargers now play their home games in L.A.

Kwamie Lassiter spent most of his career with the Arizona Cardinals

Converting to weeks, we find that Kwamie Lassiter died 4 weeks, 6 days after his birthday:

The date he died had Full numerology of 46

The date January sixth has several alignments with ritual sacrifice

In the Reverse order, Kwamie Lassiter sums to 213