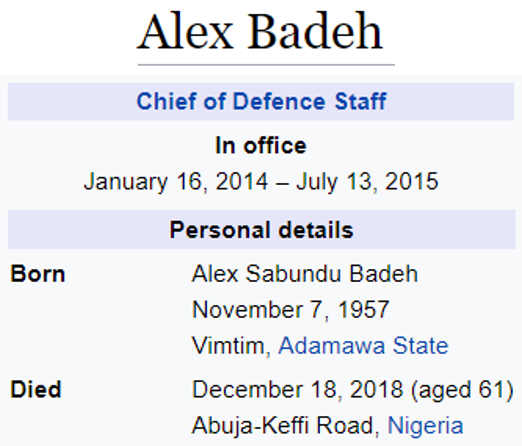 This is one of those posts I feel somewhat silly for making, but sometimes the “coincidences” are too much to handle.

Earlier today, I made a post on the death of Chris Farley because his death was recently mentioned in the media.

Farley died on December 18th at the age of 33

December 18th falls in the period of Saturnalia

Saturnalia is a holiday celebrated by sacrifice

73 is the 21st Prime number. This article was about the 21st anniversary since Farley’s death, the same day Alex Badeh was murdered, which had Tiny numerology of 21

The 73rd Prime number is 367
Badeh was the Chief of Defence Staff of Nigeria:

Farley died on a date with Full numerology of 146

Badeh died a span of 288 days before Nigeria’s Independence Day, which falls annually on October 1st:

Badeh was born in the year ’57

Alex Badeh was shot just over 46 weeks before his birthday.

Shot and Alex Badeh both sum to 62 in the alphabetic order: