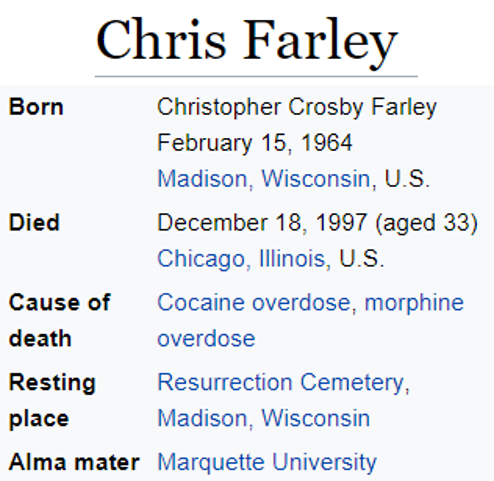 Another man with the name Christopher who died in relation to the numerology of Jesus Christ.

His final guest appearance on Saturday Night Live was on October 25th, 1997, a date with Full numerology of 151 and 61

That date, December 18th, is the day that leaves 13 days in the year: 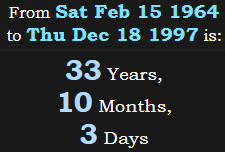 He died on December 18th

On the third day after the crucifixion, Jesus was resurrected. Notice how Farley is buried at Resurrection Cemetery. Resurrection has gematric overlap with his official cause of death, which in turn lines up nicely with the Scottish Rite of Freemasonry, who operates by the eclipse code.

Resurrection of Jesus matches Christopher Farley in the Reverse order:

In the Gospels, during the crucifixion, Jesus shouted “Eli, Eli, why have you forsaken me?”
The word ELI turned upside-down is the number 173

Many believe Jesus was sacrificed under a solar eclipse.

Farley died exactly 70 days before the next total eclipse

The next total solar eclipse after that was the Great European eclipse in August of 1999. Farley died 601 days before that date:

Farley was born in Madison, Wisconsin

The date of that European eclipse had great numerology:

Is this also supposed to clue us in that he was a blood sacrifice for a total solar eclipse?

In Reduction, the word sacrifice sums to 46, the number for both kill and murder in Hebrew gematria:

Farley was born on the 46th day of the year:

Also worth noting that his birthday is written 2/15, in light of what he was most famous for:

38 is another significant number in death/killing rituals:

The date Farley died had Reduced numerology of 38

When I think of Chris Farley, I usually think of Matt Foley, the motivational speaker he played on one of the most famous SNL skits of all-time.

1331 is the number that represents a solar eclipse, and appears central to the eclipse crucifixion code.