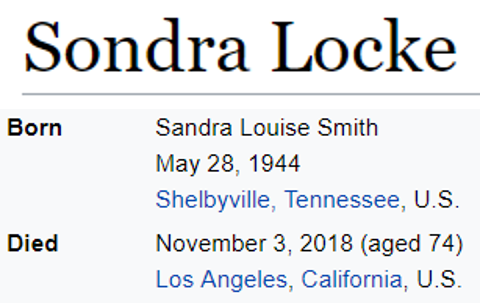 Her next birthday would have had 72 and 27 numerology:

Locke was only nominated for an Academy or Golden Globe Award once. That was for her debut role in The Heart is a Lonely Hunter. She died 270 days before the anniversary of the film’s release:

Her death was not announced until yesterday, December 14th

She was a longtime companion of Clint Eastwood, who has 74 gematria:

Her death occurred on a date with 52 and 16 numerology, less than a week after Eastwood turned 1061 months old:

After she got married to Gordon Anderson, she changed her name to Sandra Louise Anderson

She died 117 days before February 28th, written 2/28, syncing up with her stage name of Sondra Locke

This is also a span of 74 days. She died at age 74
Notice how CNN last updated yesterday’s story at 6:16

Sondra Locke has overlapping gematria with the number 13 when spelled out. She was Clint Eastwood’s companion for 13 years.

Her death was first reported by the media 41 days after she died:

This same duration is also 1 month, 11 days, syncing up with her Single Reduction and Extended gematria:

Sondra Locke wrote a book about her career that was published in 1997 on the date November 1st, written 11/1

Why wait so long to report the death? Perhaps the numerology of the date was too significant.

Locke has Jewish gematria of 88

Her death fell 3 months, 3 days after the 50th anniversary of the release of The Heart is a Lonely Hunter

On that same date, Clint Eastwood was 156 days after his birthday:

Eastwood was 197 days after his birthday when her death was announced: