This all started when I noticed something really interesting about the death of Steve Irwin. His name sums to 144 and 126, and he died 144 days before 1/26.

Ever since making that post, I’ve been observing these types of connections between Ordinal gematria and date measurements. I consider myself to be open-minded, but critical. After a couple weeks of observations, I am now 100% certain this technique is being used and is highly-significant to the study.

For my examples in this post, I will be decoding some U.S. Presidents who died in office. I am imagining it applies to other Presidents too.

This was the last President to die in office.

One date can be extracted from this number – 23/3, or March 23rd.
Measuring from March 23rd to his death on November 22nd gives us a span of exactly 35 weeks: 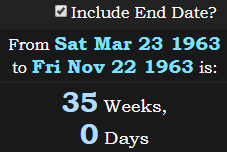 JFK was the 35th and first Catholic President

In Reverse Reduction, both Catholic and John Kennedy both sum to 46

You cannot extract any dates from “John Fitzgerald Kennedy” in Reverse or Reverse Reduction.

The date 12/3 can be extracted from this number. This can be either December 3rd or March 12th. You could also get 1/23 like January 23rd, but that date does not line up well.

8/4 is a span of 255 days before the date he died, syncing up with his Reverse gematria:

This looks like the date 25/5. May 25th was 1 month, 10 days after his death, syncing up with just Lincoln in the same cipher:

You cannot extract a date from Warren Gamaliel Harding in Ordinal, which is 200

You cannot extract a date from Warren Gamaliel Harding in Reverse Ordinal, which is 367 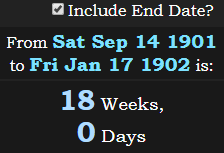 This means he died 240 days after the most recent January 17th, on a date with Standard numerology of 24