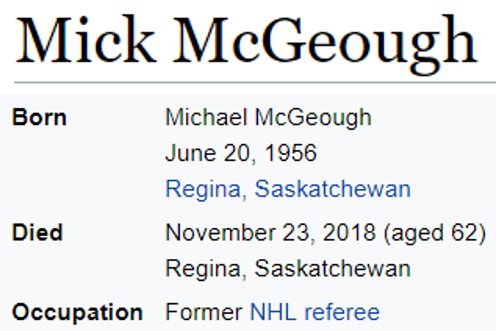 I went to Wikipedia’s Deaths in 2018 page and looked for some younger people who passed away in the last couple days and came across two relatively-young North Americans who died on November 23rd. With some of our more recent techniques in mind, let’s see if we can decode these deaths and find similar patterns. We’ll start with Michael McGeough:

We start with his real name’s Ordinal gematria:

Next, we look at the Reverse order, where Michael McGeough sums to 275

He also went by the name Mick McGeough, which sums to 115 in Ordinal:

This is one of those numbers you can get several dates from. One of them is 11/5, like November 5th. McGeough died 347 days before the next 11/5

In the Reverse order, Mick McGeough sums to 209

He died 209 days before his next birthday:

The name McGeough on its own sums to 79

The date he died had Reduced numerology of 18

McGeough was born on the 171st day of the year:

He died a span of 460 days after the eclipse: