Today, Melania Trump remains atop the headlines following her request that US Deputy National Security Advisor, Mira Ricardel, be fired.

Melania is Slovenian, having grown up in Yugoslavia. Mira Ricardel, on the other hand, is of Croatian descent.

This news story about Melania calling for Mira’s firing broke just 1 day after the 23rd anniversary of the end of the Croatian War of Independence, in which the Croats successfully gained independence from Yugoslavia and its Serbian forces.

Croatia has had a big year. In July, they lost in the finals of the 2018 FIFA World Cup tournament. That was 122 days before this story hit the news yesterday. The Croatian War of Independence, meanwhile, had been over for exactly 1200 weeks, 2 days:

Measuring instead to today, the loss was a span of 123 days ago:

The Croatian War of Independence ended exactly 1200 weeks, 3 days ago:

This syncs up with her full name gematria:

The Croatian War of Independence began exactly 10090 days ago

In numerology, this represents 19. Mira Ricardel is exactly 19 weeks after her birthday: 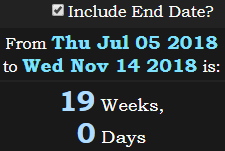 19 is a very significant number to Croatia

Why does this story involve two women? 19 and 67 are connected to female in gematria. Recall how the 19th Amendment, drafted in 1919, gave women the right to vote.

Just as I discussed in my post on Jeff Sessions, people who assume major roles in Federal Government always have a gematric connection to the job. Mira Ricardel is no exception.

22:21 is the final verse of Revelation, the final book in the Bible.

Will Mira Ricardel end up being fired? Perhaps Friday would be a good day. It’s Trump’s 666th day in office:

Friday will have Full numerology of 65

It will be exactly 33 weeks before Mira’s next birthday:

This means it will be 19 weeks, 1 day after Mira’s last birthday, and 161 days before Melania’s next one, syncing up with Ricardel’s birth name:

The date November 16th leaves 45 days in the year. Trump is President #45

This lines up with her other previous name.

It will be 155 days after Trump’s birthday: