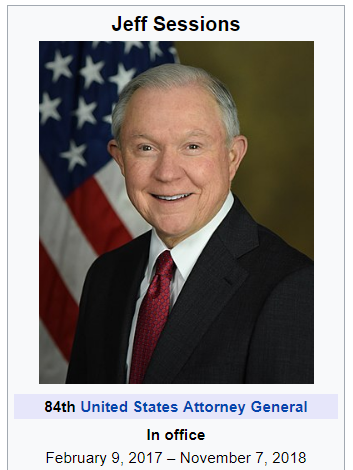 Not only does Jeff Sessions sum to 146 in Ordinal, but his full name, Jefferson Beauregard Sessions III sums to 146 in Reduction:

14/6 is the date of birth of the man he worked for, Donald Trump. Sessions resigned exactly 146 days after Trump’s 14/6 birthday:

Jeff Sessions, on the other hand, celebrates his birthday on Christmas Eve, December 24th. This year, it will have a life lesson number of 47

See more on the significance of 47 to our federal government.

The man who replaced Sessions as Acting Attorney General was Matthew Whitaker, who was 47 when Sessions took office:

In Reduction, this sums to 127, matching Whitaker’s full birth numerology.

He was originally appointed to the role on February 9th, the date written 2/9

There’s a good reason the role of US Attorney General has such a strong numeric ritual in relation to Trump in the first place. Look at the gematric overlap:

So just how perfect is the name of the new Attorney General, Matthew Whitaker?