I predicted a major celebrity sacrifice for today. It doesn’t look like we’ve gotten one yet. I would like to point out, however, the very interesting numerology behind the death of Italian volleyball player Sara Anzanello, who passed away today due to liver failure – certainly not a common cause of death for an athlete. (This has since been updated to Leukemia, which of course has been the topic this week with Roman Reigns)

The Italian died 12 weeks, 3 days after her birthday:

The main reason I saw a sacrifice in the cards for today was because of how today stacks up to the most recent and next total solar eclipses. (Jesus was crucified under a solar eclipse in the Gospels).
Earlier this year, I predicted June 18th would be a major sacrifice date, and two rappers were killed, including XXXTentacion, who was born on 1/23

Jesus was crucified under an eclipse at age 33

In yesterday’s post, I noticed how today’s date has a very interesting alignment with ritual sacrifice

Today is the date internationally written 25/10
Today is a span of 251 days before the next total solar eclipse:

In the standard alphabetic order, ritual sacrifice sums to 154

She died in Milan, Italy

Anzanello’s birthday of July 30th leaves 154 days in the year:

Because she was born in a leap year, this was the 212th day of the year:

Anzanello had won a gold medal

Her birthday is written internationally as 30/7 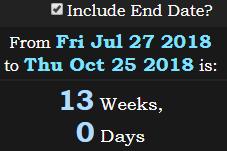 Thirteen has the same gematria as the Hebrew word for sacrifice

Her death fell a span of 2 months, 26 days after her birthday:

This is where it gets a little complicated, but I’ll try to make it simple.

Anzanello finished her career with 203 caps for the Italian volleyball team, who she helped win several World Championship and Grand Prix gold medals.

This number begins with the 139 from above, and ends with 67