His constituents were in Moore County

He died on the date October 10th, the date universally-written as 10/10

He died at Duke University in Durham, North Carolina

Revelation is the 66th and final book of the Bible. Richard Morgan died at age 66

66 is the 11th Triangular number, a relationship represented in his common name gematria:

The most famous verse of Revelation is 13:18, which reveals the number of the Beast: 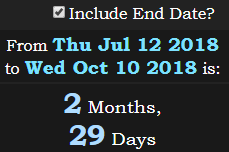