My brother made a post on Facebook today linking to an article about Gene Wilder’s death. Apparently, he didn’t know he died two years ago.

With all the decoding I’ve been doing of the Milwaukee Brewers and the World Series this year, I find it somewhat appropriate to decode this death, since Gene Wilder was from Milwaukee…

…And he died in relation to the 2016 World Series, which was won by Chicago.

Wilder was best-known for his role as Willy Wonka

The Cubs won the World Series in their 145th season. 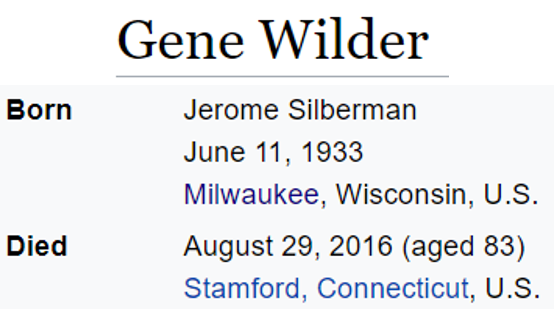 He died in Stamford, Connecticut, which has matching gematria with The Milwaukee Brewers

223 synodic months in the Saros cycle

It was the 112th World Series in history
Game 7 of the series was played on the date written 11/2
Gene Wilder died 11 weeks, 2 days after his birthday:

Was this death also related to the Brewers making the World Series here in 2018? Measuring from his death to the start of the 2018 World Series is 112 weeks:

Measuring instead from Wilder’s death to his next birthday, we find it was 40 weeks, 6 days:

The date he died had a life lesson number of 46

That year’s World Series was won by the Chicago Cubs

The date had Reduced numerology of 26

Both Chicago Cubs and sacrifice sum to 206

The date had full numerology of 73

On the date he died, Wilder was 83 years, 79 days old when he died in Stamford, Connecticut

The date he died had alternate numerology of 44

The Moon and Saturn are the “bookends of time”. They share an incredibly interesting synchronicity with their orbital periods. See more

It’s the numbers of the Moon that continue to lead me to believe the Brewers will make, and possibly even win, this year’s World Series.

The Moon’s most significant cycle of time is the Metonic cycle, which is a period of 19 years and 235 synodic months.

So just how freaking perfect is the name Willy Wonka for a man who already has matching gematria with the word Moon?!