In 1984, there was a mass shooting at a McDonald’s in San Ysidro, California in tribute to Ray Kroc, who turned McDonald’s into a corporation in 1955.

The date was July 18th, written internationally as 18/7
In the state of California, 187 is the homicide code:

This shooting was a span of exactly 187 days after the death of Ray Kroc:

983 is the 166th Prime number
The shooting occurred on the date that leaves 166 days in the year:

The date had full numerology of 128…

…and alternate numerology of 119

The shooting occurred on a date with Reduced numerology of 38

San Ysidro is a suburb of San Diego

The date had a life lesson number of 47

Forty-seventh has matching Ordinal gematria with the name of the shooter, James Huberty

13 is a very significant number to McDonald’s
Not only does it begin with M, the 13th letter, but their logo shows a 13 when turned sideways 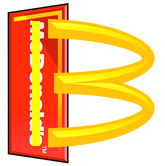 The 13th Triangular number is 91, matching the name of the corporate founder:

The gematria of 13 is the same as the shooter’s last name, which has the exact same numbers as Raymond in all four base methods.

The massacre occurred right outside of San Diego, California

13 is a significant number to the Moon, which also begins with the 13th letter, and also has gematria of 99

For every 19 years, 7 of them contain 13 lunar phases. This is called the Metonic cycle

In those 19 years, there are a total of 235 lunar phases.
On the date of the shooting, McDonald’s was exactly 2305 weeks old:

This is also equivalent to 530 months, 3 days

This shooting fell 1 year, 201 days after the most recent total lunar eclipse:

Measuring instead to the next total lunar eclipse, we find it was 290 days:

McDonald’s was registered as a corporation in 1955, making it 29 years old during the shooting: 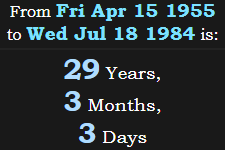 3 months, 3 days after their corporate anniversary?!

Again measuring to the original founding date of McDonald’s back in 1940 by the McDonald family, we find it was 44 years, 64 days old: