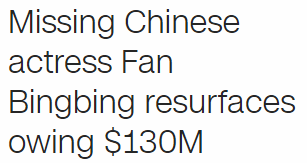 The fine is for tax evasion

Essentially, the headline tells us right off the bat that this was nothing but a numeric ritual

This story is stamped with those of the divine feminine. Perhaps my post on Mac Miller contains the most pertinent info and links to establish what these numbers are.

911 turned upside-down is 116, matching the name Bingbing in the same cipher. She was also born on a date with 116 numerology.

13 is definitely another one of those numbers. Much like The Moon, women typically go through 12 or 13 cycles per year.

The 99th Prime number is 523, found in the headline with Reduced calculation:

Concern about Bingbing began to grow after she ceased all social media activity on Weibo. Her last message was sent July 23rd. 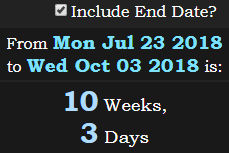 She came out of hiding and broke her silence on social media platform Weibo on October 3rd, the date written 10/3
This was 10 weeks, 3 days after her last Weibo update:

Before going missing, Bingbing‘s last public appearance was on July 1st, a date with full numerology of 46

This date also had 19 numerology:

Above, I mentioned how the numbers of The Moon is coded into stories about women. The Latin name for the Moon is Luna

The headline is 48 letters long.

Was this number crafted by part of the Masonic network?