Prominent businessman Philip Trenary was murdered on September 27th. Wikipedia is currently showing his death to be on September 28th. Perhaps he survived until after midnight?

Either way, the day this story made the news was Friday, the 271st day of the year. Trenary was the former CEO of Pinnacle Airlines

On that same date, Trenary was 58 days after his birthday:

September 28th had a life lesson number of 48

Philip Trenary sums to 81 in Reduction, another number of ritual killing

He was killed in Memphis, Tennessee

He was born on August 1st, the date written 8/1
Most parts of the world write this date 1/8

Right across the street from where he was shot, the neighborhood was celebrating Trolley Night’s 18th birthday:

In Ordinal, Pinnacle sums to 74

He was shot on a date with 74 numerology

Check out the description they gave of the killer: 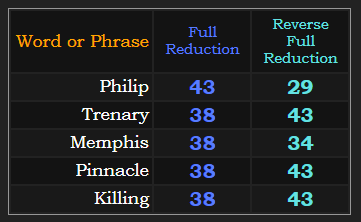 This murder occurred in the state of Tennessee

This code comes from the Bible, which contains the Gospels and the story of the crucifixion of Jesus Christ