Marty Balin was the primary founder of the band Jefferson Airplane

He died exactly 7 months. 4 weeks after his birthday… 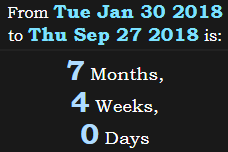 …On a date with 74 numerology

Measuring instead to his next birthday, we get 4 months, 3 days, or 4 months, 4 days with the end date included:

News of his death primarily surfaced on September 28th, the date written 28/9 in most parts of the world.

Because there’s always something pi-related…

Remember how Stephen Hawking died earlier this year on Pi Day? He was reportedly 76 years old: