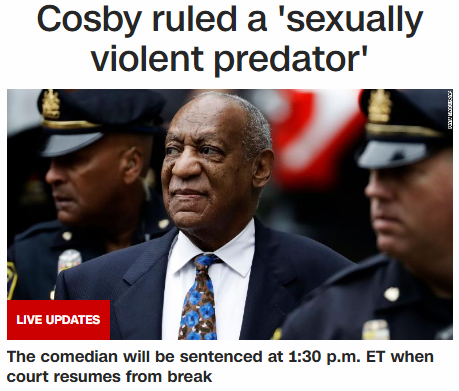 The sub-header has matching gematria with Cosby in the alphabetic order:

Today is 2 months, 13 days after his birthday:

This is a number commonly stamped on blacks.

I personally believe this number traces back to the Bible code. It’s likely Jesus was black, or at least a lot darker than the pictures they show us of him.

He was convicted on three counts Aggravated indecent assault

This appears to be attributed in the headline:

It’s 290 days before his birthday:

Christ was crucified under a solar eclipse according to the Gospels.

The number that represents a solar eclipse is 1331. See why

Intriguingly, this is the same as 400 days.

In that method, the word eclipse sums to 222
It’s 2022 days before the next Great American eclipse:

Today has standard numerology of 52

The 54th Prime number is 251, syncing up with the Jewish gematria of today’s date:

Today also has numerology of 43

It’s been 4 months, 30 days since Cosby was originally convicted on April 26th:

Cosby’s first TV show, The Cosby Show, even aired its series finale on 4/30.

That show aired its final episode in 1992, which is a little over 316 months ago: