SiriusXM is a satellite radio company. The word satellite sums to 350, reflected by the amount of the deal, $3.5 billion.

The word Radio sums to 144 in Jewish gematria:

In the alphabetic order, there are only two numbers that sum to 144 when spelled out:

In the alphabetic order, Radio sums to 47

Notice how these are the same numbers as the word Time

4×7 = 28
Prior to SiriusXM, the company was simply called Sirius Satellite Radio. They were founded 28 years, 4 months, 7 days ago: 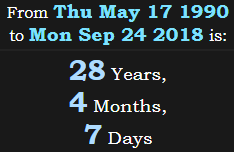 SiriusXM was founded on July 29th, 2008. That happens to be the 50th anniversary of the date NASA was established in 1958. Both companies launch objects into outer space.

SiriusXM also sums to 57 in this same method:

Measuring from July 29th to the date of this announcement is 57 days:

The number 13 has Jewish gematria of 347