The win came on a date with 52 numerology

The word five has Ordinal gematria of 42

The win came 4 months, 20 days after the anniversary of the death of his father:

On the date he won, Tiger Woods was 42 years old, in his 268th day since his birthday: 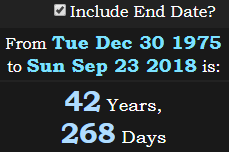 The name Tiger Woods sums to 268 in both methods of Franc Baconis gematria:

Woods’s last victory came at the 2013 Bridgestone Invitational, which was exactly 268 weeks ago:

He won the tournament on September 23rd

In Reduction, September 23rd sums to 98

It was 98 days before Tiger’s birthday:

In regards to his eightieth win coming at the Tour Championship…

74 is a Masonic number, and it’s the Ancient Accepted Scottish Rite of Freemasonry controlling professional sports.

Think about how Tiger Woods wears Red every Sunday

Red is the color of the Jesuit Order – it’s the Catholic Cardinals who wear red, most famously on Sunday.

In Jewish gematria, The Society of Jesus sums to 227, a number closely-related to circles and pi.

Speaking of numbers of ritual…

Tiger Woods’s father, Earl Woods, would have been 28 weeks, 6 days after his birthday:

As for the headline:

Remember, Tiger Woods sums to the same numbers in Ordinal and Reverse. Perhaps that’s why the headline has the rare quality of having the same sum in both English and Jewish gematria: