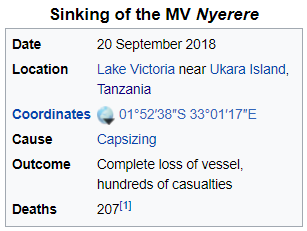 The capsizing in Tanzania took place on a date with 49 numerology:

As I consistently document, dates of disasters are aligned with the dates politicians who govern over the region took office. The current Prime Minister of Tanzania is Kassim Majaliwa, who was in office for exactly 34 months on the date of the accident:

This means it was also 304 days after his second anniversary in office:

The capsizing occurred on September 20th, the 263rd day of the year:

263 is the 56th Prime number. The nation of Tanzania declared its independence in December of 1961, making it 56 years old:

The President of Tanzania, John Magufuli, was one week after his 56th birthday when he took office back in November of 2015:

The ferry crashed on Lake Victoria

The Society of Jesus, the masonic order within the Catholic Church, is largely responsible for positioning officials into office on particular dates in nations all around the world. I contend they may also be responsible for the disasters they oversee.

Majaliwa was born in ’61, the same year Tanzania declared its independence. Both he and Magufuli have this number in Reduction:

Majaliwa also shares 86 gematria with the nation he governs, Tanzania

The birthdays of Tanzania’s President and Prime Minister are separated by 2 years, 54 days:

The 9/11 attacks in the U.S. destroyed the World Trade Center, which sits almost exactly on the 74th meridian in New York

On the date the ferry capsized, President John Magufuli was exactly 3073 weeks old:

On the date of the capsizing, Magufuli had been in office for exactly 1050 days:

The 15th letter of the alphabet is O, a circle.

The 15th Prime number is 47, which is the number of degrees the compass on Freemasonry’s emblem. Of course, a compass is used to draw a circle.

The ferry crashed on the 33rd parallel. The highest degree of Masonry is (said to be) the 33rd