EDIT: The date of the alert has been pushed back to October 3rd. See how that date is another ideal one.

The video in the linked article above begins with CNN’s “Reliable Source” (code term for “lying piece of trash”) Brian Stelter saying the following quote: 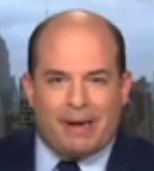 “We’re all used to Amber Alerts on our phones; we’re also used to those severe weather alerts”

No, we’re not all used to Amber Alerts. No one gets “used” to waking up two hours before their alarm because some kid two states away was taken across state lines by the parent who lost custody in court. It’s an invasive, Big Brother-esque system that is in no way a good solution for finding missing children.

The Amber Alert system is a highly-selective process – it ignores dozens, if not hundreds or thousands, of missing children cases and only tends to relay information about high-profile cases. The point is, I don’t believe the government should have the ability to essentially ring your doorbell whenever it wants.

Naturally, the feds are taking this invasive concept one step further by now allowing President Trump to send an annoying, panic-inducing alert sound to your phone at any time he chooses. Next week, FEMA will begin testing the “Presidential Alert” system on Thursday, September 20th, at 2:18 pm:

The date also has 47 numerology, ideal for Trump, the Twitter President

In Reduction, both FEMA and alert sums to 20, also lining up with the date numerology:

2:18 pm? Why such a specific time? Why not 2:00, 2:15, 2:30? Unless you’ve been hiding under a rock the past few years, you should know that the elite classes know about gematria, a component of numerology inherent to the Kabbalah, which Trump openly practices.

Of course, this is the year 2018…but nevermind that.
2 hours and 18 minutes is 138 minutes, matching Donald Trump in simple gematria:

Remember, Trump was born on the date of a total lunar eclipse.

The date of the alert will be September 20th, written 20/9, a date with double numerology of 29

It’s a good date for a numeric ritual:

Finally, the date will have full numerology of 67

You have to appreciate the gematria of the alert text:

Ravens vs. Bengals – Tribute to the Battle of Baltimore
Yasiel Puig Hits 5 Home Runs in 2 Games