What are the odds of this type of alignment with the headline and the word collapse?! Not very high… 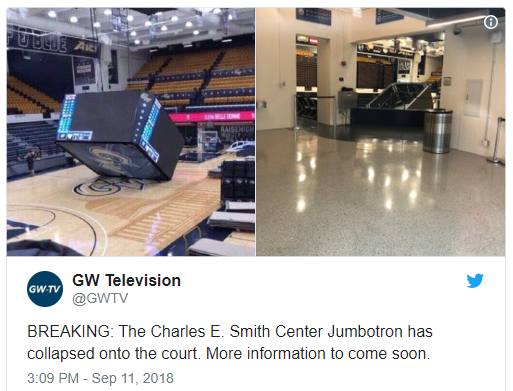 The date of this Jumbotron collapse had 38 numerology

In Full Reduction,  collapse sums to 29, matching the day’s numerology in multiple methods:

The collapse occurred on a basketball court, lining up with the date’s Reduced numerology:

Of course, the date was September 11th, a date infamous in the United States for the collapse of the World Trade Center

This Jumbotron collapse occurred at the Charles E. Smith Center

211 is the 47th Prime number. The arena is in Washington, D.C., the headquarters of the Scottish Rite of Freemasonry, who has an emblem with a compass set at 47 degrees.

The Charles E. Smith center was named after developer Charles E. Smith, who died on December 30th, 1995, which was 8291 days before the collapse. 8291 is a Prime number:

The linked Bleacher Report article was even written by Scott Polacek