On the same date Colin Kaepernick is in the news, we get news about another C.K. – this time, it’s Louis

The date of this news falls 14 days before Louis C.K.‘s birthday, or 13 without the end date included:

The performance was on Sunday, a date with a life lesson number of 45 and reduced numerology of 27

The performance occurred exactly 290 days after the release of his movie was cancelled due to accusations of sexual misconduct:

The 9th day of the 11th month on the Hebrew calendar also has this property:

In Ordinal, Tisha B’Av sums to 82
Louis C.K. was 8 weeks, 2 days after his birthday when his character was “sacrificed”.

This is also 58 days. Tisha B’Av commemorates the destruction of Solomon’s Temple and the Second Temple

Measuring back from that date to the attacks on September 11th, which was of course a massive Tisha B’Av ritual, is exactly 5903 days. 5903 is the 777th prime number

How about this quote from the article:

Imagine that – someone voicing an opinion without being willing to put their name on it. That should be an indicator that the opinion is not worth voicing in the first place.

In the other capital letter cipher, Rape whistle sums to 162

This syncs up with the name of the film that Louis C.K. had cancelled:

Remember his quote after he got caught and admitted it?

Look at Wikipedia’s contents for Louis C.K. – his sexual misconduct, which I just exposed as a Tisha B’Av ritual, is discussed in section is 2.5.1 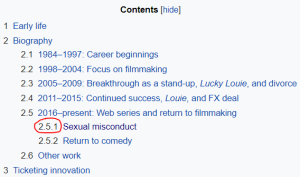