Lebron was just one day before his 60th birthday, meaning that with the end date included, he was exactly 720 months old: 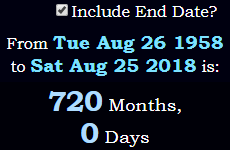 Meanwhile, Trump was 72 days after his 72nd birthday:

This news is primarily being seen by people today, August 26th, a date with full numerology of 72

It’s the date that leaves 127 days in the year:

127 is the 31st prime number. Michael Lebron is better-known by his nickname Lionel

The story became news last night, so it’s still in the headlines today, which is the first day of Michael Lebron’s 61st year (he turns 60 today).

Trump was also a span of 10 weeks, 3 days after his birthday: 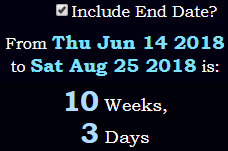