The state of journalism must be in real trouble when the first two words of any headline are “Some dude”.

This headline sums to 706 in the alphabetic order:

The Governor of Georgia, Nathan Deal, turned 76 years old on the date of this incident:

Why would Jay-Z and Beyonce be used to pay tribute to this man? They have matching gematria:

The date had full numerology of 71

Deal had been in office for 7 years, 227 days on that day, ideal for a masonic ritual:

The mayor of Atlanta was even 220 days after her birthday:

220 is another number Freemasons, many of whom consider themselves to be master builders, are fond of:

Notice how the headline is also coded with the gematria of 13, our primary ritual code:

The concert was in Atlanta, Georgia, which, just like Jay-Z & Beyonce, has Ordinal gematria of 131, like a forwards and backwards 13

This story comes a span of 131 days before the first anniversary of Atlanta’s Mayor, Keisha Lance Bottoms, being sworn into office:

You have to appreciate the phrase On the Run II…you would certainly be on the run, too if a crazy fan ran up to you.

Something else that’s pretty interesting about the fact that this happened in Atlanta is that today, the day after the incident, there was a mass shooting reported in Jacksonville during a Madden ’19 tournament. When the shooting began, both players were using the Atlanta Falcons: 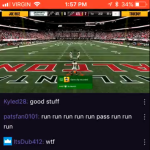 The other primary ritual code is 33. Atlanta is on the 33rd parallel:

The date of the incident had 33 numerology:

The 33rd prime number is 137, matching the name of the tour the couple is performing: