Today, the date of the launch, is the 224th day of the year:

The probe will be the first spacecraft to explore the outermost atmosphere of the sun, the Corona

Today also has full numerology of 58

Today also has reduced numerology of 22

Notice the phrase they quoted in the headline – ‘Mission to touch the sun’. The 22nd triangular number is 253

The sun is ~93 million miles away

The launch occurred at 3:31 this morning

109 represents 19 in numerology. There are 19 years in the Metonic cycle, the Moon’s most significant measurement of time.

The name of the spacecraft is the Parker Solar Probe

While the probe won’t quite eclipse the sun, the symbolism remains. The object will be in outer space, between the Earth and the Sun, just like the Moon during a solar eclipse

This launch falls a span of exactly 51 weeks after the Great American total solar eclipse of 2017: 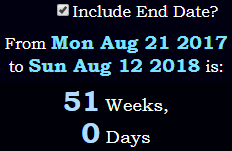