The mathematics of the circle are integral to much of our fake news propaganda machine. The circle is represented numerically through the number pi, which begins with 3.14

The smallest equation you can use to get these first three digits of pi, 3.14, on a calculator is 22 ÷ 7
This also works in gematria:

A circle has 360 degrees. When spelled out, the number 360 has Ordinal gematria of 227, like the three digits in the above equation:

These geometric qualities of our language are acknowledged by secret societies, the most ubiquitous of which is the Ancient Accepted Scottish Rite of Freemasonry, who is responsible for feeding us the mainstream media’s narratives:

Masonry is shrouded in ritual and symbolism

Freemasonry has blue and red lodges. Consider this fact when observing the flags of the nations involved in this story. First, the official flag of Thailand, where the young soccer team was rescued from:

On the date the final members of the soccer team were successfully rescued, The King of Thailand (Vajiralongkorn) had been on the throne for 20 months, 27 days:

It “just so happens” that this story emerged during the World Cup, which is of course the biggest soccer tournament in the world. The World Cup was being hosted in Russia, whose flag is also red, white, and blue:

The Finals of the World Cup consisted of two teams whose nations also have red, white, and blue flags, France and Croatia 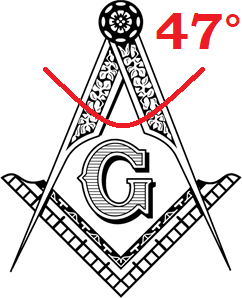 On the left is the Freemasonic emblem. It’s made up of a square and compass. The compass is set at 47 degrees. In masonry, they teach the 47th problem of Euclid, which is about establishing “Foundation” = 47 (R). 4 is the number of foundation, and the 4th prime number is 7.

As such, this is a number they love to stamp into their propaganda.

Let’s take a look at how it applies to the Tham Luang Cave rescue. The young soccer team first entered the cave on 6-23-18

This number holds true even in the Jewish cipher:

The World Cup was won by France, in the nation of Russia, a span of exactly 47 weeks after the first total eclipse to travel from coast-to-coast in the United States in nearly a century.

The 47th prime number is 211
On the date the team originally got lost in the cave, June 23rd, King Vajiralongkorn of Thailand had been on the throne for a span of 20 months, 11 days.

You may recall how Elon Musk was involved with this story – he supposedly built a mini sub to help out with the rescue. He later got in a Twitter feud with the team’s coach for calling him a “pedo”.

Elon turned 47 while the team was trapped

The rescue of the 13th and final team member was completed 13 days after Elon’s birthday. The name of the soccer team sums to 103

Freemasonry is especially fond of Master Numbers like 11, 22, and 33, which is the highest (known) degree of Masonry

Both Thailand and Thai cave have gematria of 33

On the date the final members of the team were rescued, July 10th, it was 15 weeks, 6 days after his birthday.

Meanwhile, the King of Thailand was born on the date leaving 156 days in the year:

Measuring from the date the Prime Minister took office, you find he had been in office for a span 202 weeks, 3 days. This matches the Reverse value of Tham Luang Cave

22 is the Master Builder number

22 is a special number to soccer – it’s the number of men on the pitch during a game. Measuring from the date the Thai soccer team entered the cave, to the date of the World Cup final, gives us 22 days. It was also on a date with reduced numerology of 22

The date had a life lesson number of 40, matching the Reduction value of the team’s name and World Cup

The date had full numerology of 67, the 19th prime number. See my previous work on the World Cup final to understand how significant the number 19 was.

There was one fatality during the rescue – a diver died of asphyxiation while attempting to deliver supplies to the cave. This happened on the 187th day of the year.

187 is slang for the homicide code. The date is written 6/7 internationally or 7/6 here in the United States.

For some reason, the Wikipedia article says he’s 38 years old, but later says he was 37