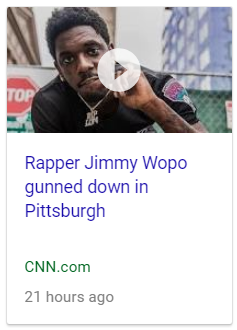 The same day rapper XXXTentacion was killed on a date I predicted there to be an eclipse sacrifice on, rapper Jimmy Wopo was also shot dead in Pittsbugh, Pennsylvania. It’s best to read my post on XXXTentacion, linked above, before going through this one.

Again, I didn’t make a post about this prediction, but I have a dated e-mail saying we’d definitely see something big on Monday, and listed why. 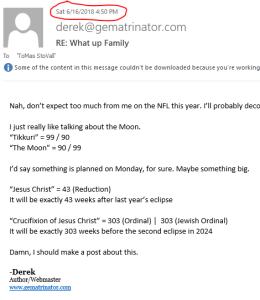 Yeah, I guess I should have made a post about this instead of my ridiculous U.S. Open prediction.

Just like XXXTentacion, Jimmy Wopo was a Blood sacrifice for the Total solar eclipse

Tupac was shot and killed on the 257th day of the year. Rapper Jimmy Wopo was 257 months old:

Jimmy Wopo was born 55 days before Notorious B.I.G. was shot and killed. That murder was on the same date as a total solar eclipse.

Biggie’s murder and that total eclipse occurred on March 9th, the date written 3/9

He died 3 months, 9 days after the anniversary of Biggie’s death:

2111 is the 318th prime number. The second coming of Christ is mentioned 318 times in the New Testament.

Jimmy Wopo, who was from Pittsburgh, has matching gematria with Total solar eclipse

In that same Reverse Reduction cipher, Wopo’s full name sums to the same as eclipse sacrifice in Ordinal

His common name sums to that fateful 73 number…

In Hebrew, eclipse sums to 156, the number of days after his birthday Wopo was when he was killed

Wopo had some numbers of racism…for starters, the word nigger sums to 60 using the standard alphabetic order. The 60th prime number is 281

213 was a significant number in the deaths of Tupac & Biggie. It’s another number frequently-stamped into racial propaganda.

In that Francis Bacon cipher, his stage name sums to 191, which is the 43rd prime number. He died exactly 43 weeks after the Great American eclipse.

1331 is the number that represents a total solar eclipse. Jimmy Wopo was born on the 13th day of the year, on a date with 130 and 31 numerologies in Pittsburgh

Are these two men really dead? It’s intriguing that Jimmy Wopo = Freemasonry. Remember, Tupac was shot and killed on 13/9

When you combine the two deceased rapper’s names, you get the number 317, which I’ve exposed as a hoax code on many occasions. The number 317 is the word LIE flipped upside-down, which is attributed in gematria.