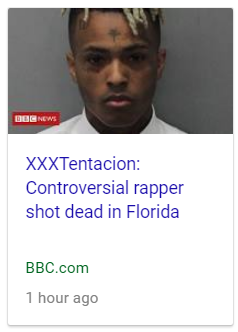 I didn’t make a post about it, but in an E-mail I sent to my cousin last week, I said today, June 18th, was the day to look for an eclipse sacrifice.

Today is exactly 43 weeks after the 2017 Great American total solar eclipse and is exactly 303 weeks before the next American eclipse in 2024.

And whaddaya know? We get the death of a rapper with the stage name XXXTentacion

He died 146 days after his birthday:

He was shot outside of a Motorcycle dealership

His major-label debut album 17 dropped on the first day of his 1023rd week alive.

See my work on Tupac & Biggie to see how relevant 74 is.
But not only is XXXTentacion a rapper, but he has a cross on his forehead:

EDIT: The “cross” is actually a tree – there are some clearer images available than the one above that I didn’t see when making this post. I don’t know for sure if there was intent to make it look like a cross, but from anywhere but up-close, it has that shape.

His real name is Jahseh Onfroy

This guy was born in Plantation, Florida