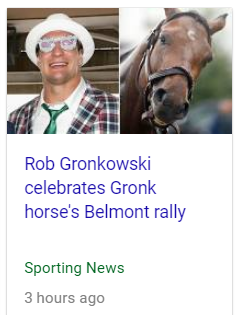 To recap, let’s begin with the date of the race, June 9th, written 6/9

The horse that placed second is named after Rob Gronkowski

Pi is 3.14, syncing up with the age of Bob Baffert, Justify’s trainer

Justify won the 13th Triple Crown. Bob Baffert was born on the 13th day of the year.

The 13th prime number is 41. Measuring from Bob Baffert’s January 13th birthday to Rob Gronkowski’s on May 14th gives us 4 months, 1 day:

Pi and 3.14 of course refer to the mathematics of the circle.

Bob Baffert was 7 months, 4 days before his birthday on the date of the Belmont. The 74th prime number is 373

Pi is one of, if not the most, significant irrational number to the study. Another one is Phi, otherwise known as the Golden Ratio. This number begins with 1.6180…

On the date of the Belmont, Rob Gronkowski was 10618 days old:

See my post that highlights the Golden Ratio tribute from the MLB on this same day, which took place in a game involving the Philadelphia Phillies, one day after the Golden State Warriors, who used to play in Philadelphia, won the NBA Championship.

Gronkowski the football player was born on a date with 127 numerology:

Gronkowski the horse was foaled 1 month, 27 days before Justify: