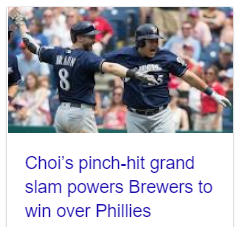 The Brewers don’t hit many Grand Slams, it seems. Ji-Man Choi knocked one out yesterday, however, to give the Brewers a 6-3 lead over the Phillies in a game they would eventually win 12-3.

Ji-Man Choi just celebrated his 27th birthday a few weeks ago. On the date of the game, he was exactly 27 years, 3 weeks old: 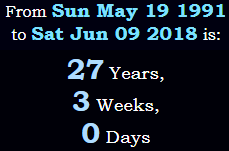 His age can also be converted to 1411 weeks:

The Brewers wound up winning 12-3

This grand slam turns out to be a Golden ratio ritual related to Rob Gronkowski, who is trending after his horse finished 2nd at the Belmont. Gronkowski was exactly 10618 days old:

Ji-Man has triple gematria of 161

The Golden Ratio is also called Phi. The Grand Slam came off the Philadelphia Phillies, a day after the Golden State Warriors, formerly from Philadelphia, won the NBA Finals.

His career batting average after the game was .191, which is 161 upside-down.

Notice how he’s also had 157 at-bats. He was born 1570 days after the pitcher who gave up his grand slam. That pitcher wears #57

190 is a big Moon number. It’s the 19th triangular number. There are 19 years in the Metonic cycle.

Garcia’s birthday is 1/30, and of course 13 is a significant Moon number as I document frequently.

It’s especially funny that Garcia wears #57 because another significant home run hit by the Brewers was off the bat of Tyler Saladino a couple weeks ago. That also came off of #57, as detailed in the linked post.

Choi has full birth numerology of 134, matching the Ordinal value of the pitcher’s full name.