Thanks to @American Jedi in the Discord chat for following through on this theory that our news is being scripted out based on episodes from Batman from the 1960’s. I saw some truth to this theory, but this is the most concrete yet.

This is all about a two-part episode that aired on December 7th and 8th, 1966. The first episode was called The Bird’s Last Jest, and the second was called The Penguin’s Nest

I opened up my first post discussing how significant the number 119 was to this ritual. So it’s interesting that the villain for this episode was The Penguin

The Penguin was played by Burgess Meredith

In my post, I also discussed how significant the number 23 was to this death. This two-part episode was written by Lorenzo Semple Jr.

The chef of The Penguin’s restaurant was Cordy Blue, played by Lane Bradford

The first episode of the series was the show’s 61st. Bourdain died at age 61, 61 months after his show, Parts Unknown, first aired:

Measuring from the date of the second half of the two-part episode from the Batman show in 1966 gives us almost the exact same number – 18810 days:

The episode even has contemporary news mentioned – for instance, the meeting they have at the restaurant is to discuss prison reform, an issue Kim Kardashian recently visited the White House to meet with Jared Kushner about.

Then there’s this detail:

Why? This doesn’t seem to have any other bearing on the story. Could this be because this Tuesday was a Voting day in America? Voting takes place in a voting booth…perhaps this is why the men enter a phone booth shortly after the meal begins: 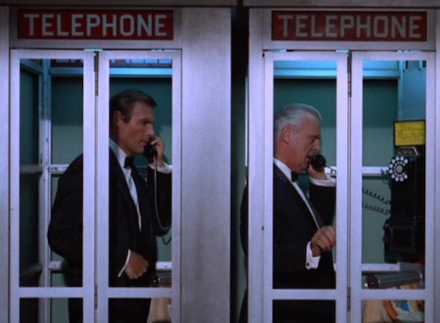 Visit the episode synopsis and do some more theorizing for yourself.