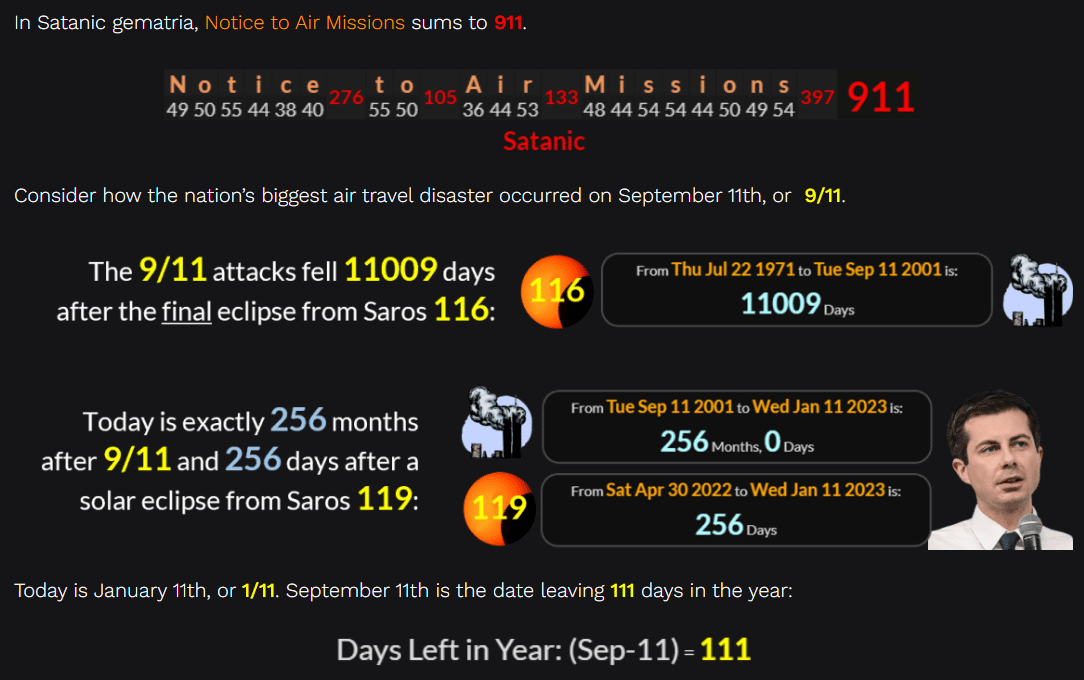 The outage was in the FAA’s Notice to Air Missions system.

Today’s problems plaguing the FAA are connected to the Secretary of Transportation, Pete Buttigieg.

55 is the Ordinal value of Satan. This story pays homage to Satanic gematria.

Today’s date is 1/11. Buttigieg has been in office for a span of 101 weeks, 1 day. The number 1 closely resembles the Hebrew letter Vav (ו). Vav is the 6th letter, so this could be perceived as 6/66. Any word or phrase with 111 Ordinal gematria will also sum to 666 in Sumerian.

Satanic gematria is a cipher built around the number 666:

The Church of Satan was founded on a date with Primary numerology of 119:

The current Secretary of Transportation has Primary birth numerology of 121:

The Life Lesson number of the date the Church of Satan was formed was 56:

The 19th Secretary of Transportation Pete Buttigieg was born on the 19th day of the year, January 19th, or 1/19:

Today has a Life Lesson number of 19 and is the 11th day of the year:

Due to his time as the mayor of South Bend, his nickname is Mayor Pete.

Pete was also 235 days after his birthday for 9/11. The Federal Aviation Administration was founded on the 235th day of the year, August 23rd, which is typically the first day of Virgo, ruled by Mercury. Mercury was the Roman god of transportation.

Some will mistake me as the bigot for pointing this out, but I’m just saying…

“Peter” is often used as slang for a penis. Peter Buttigieg is homosexual, so he might judge your booty. He was the mayor of South Bend, and some homosexuals bend over and take it down south.

As mentioned above, Buttigieg became the head of the D.O.T. exactly 666 lunations after its founding.