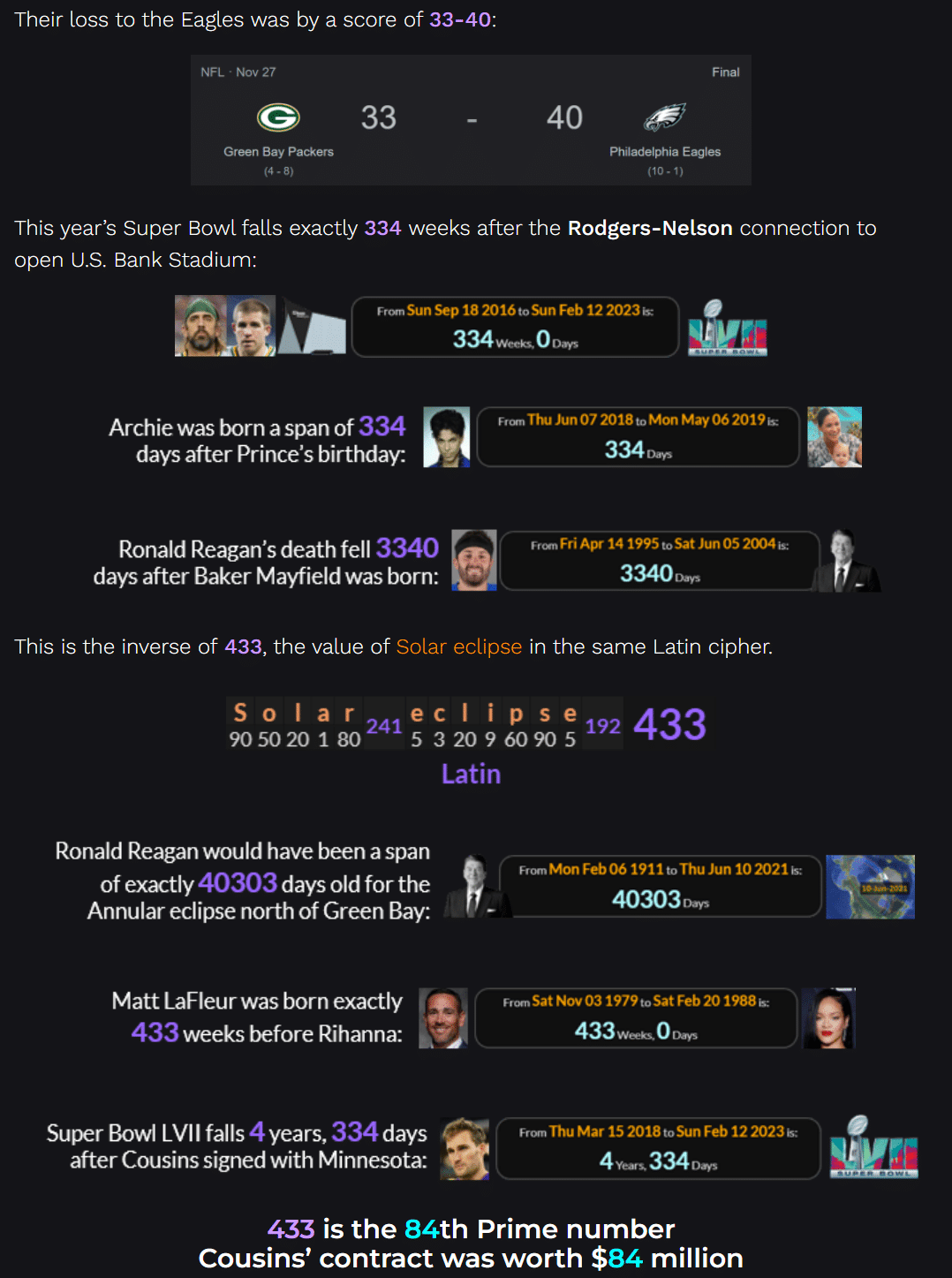 In 2022, we crowned a new American League home run King, whose first name is Aaron. It happened less than a month after we got a new King of the United Kingdom, King Charles.

This season’s Super Bowl takes place in the year 2023. On the first day of the year, the Packers will play the Vikings in a must-win game. The Vikings wear purple, the color of royalty.

Last year’s Super Bowl ended with a score of 20-23. In 2010, the last year the Packers made it to the Super Bowl, they lost to the Miami Dolphins 20-23 in Overtime. More on this connection below.

The date Charles assumed the throne was September 8th, or 9/8, the date that Queen Elizabeth died. If the Packers win their final three games to make the playoffs, they’ll finish at 9-8 on the season.

On the same date as Rodgers’ win over the Rams in a major eclipse riddle, Reds’ pitcher Tom Browning, one of only 23 men to throw a Perfect Game in MLB history, died unexpectedly at the age of just 62. Think of the name “Browning” in connection with former Cleveland Brown Baker Mayfield and the Brown Lunation Number:

Aaron Rodgers picked up his 145th win of the regular season against the Rams in connection with the eclipse over Uttarakhand.

In order to get to the playoffs and make the Super Bowl, the Packers must be “perfect” from here on out. Their next game is against the Dolphins, who were the only team to ever complete a perfect NFL season. The man who led them to their championship that year, Don Shula, died in 2020.

Shula’s middle name was Francis. Two weeks ago, I made this live stream where I discussed how Rodgers’ “Freemasonry” riddle against the Bears was a tribute to Francis Xavier, who received a number of tributes that weekend.

Prior to coaching the Dolphins, Shula coached the Colts, who I’ve been blogging about in relation to the Vikings.

Shula’s birthday is January 4th, or 1/4. The Packers are in search of their 14th NFL championship. Their win against the Rams was their 14th of the year. Teams only played 14 games in the regular season when Shula’s Miami Dolphins achieved their feat.

The Super Bowl will be played on the 43rd day of the year:

Consider how Shula’s perfect season was the same year Franco Harris made the Immaculate Reception. The Immaculate Interception was in Super Bowl 43 against the Arizona Cardinals, host of this year’s big game.

Shula and the Dolphins completed their magical season in 1973. The first number to sum to this in Latin gematria is 137, a number which contains three of the same digits.

The Packers’ win over the Rams was connected to the Middle Eclipse from Saros Series 137. 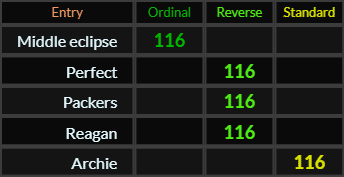 That Middle eclipse over “Uttarakhand” (119), India was 911 days before the game. The Packers beat the Rams 1 year, 16 weeks before the next Great American Solar eclipse, and 116 days before Baker Mayfield’s birthday.

Donald Francis Shula, whose playing career ended after 73 games, finished the NFL’s only perfect season with a Super Bowl win in January of ’73, which capped off the ’72 season.

72 and 57 are highly-significant Moon numbers, as the graphic below indicates (click to enlarge): 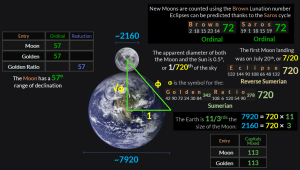 Jordy was born during Lunation 772, just like Vikings coach Kevin O’Connell, whose name also sums to 772.

It makes sense that Jordy Ray Nelson would be aligned with Super Bowl LVII. His middle name is Ray, like the Rays of the Sun.

The Jesuit Sun, much like the Sun on the flag of Argentina, who just won the World Cup, is made up of Thirty-two rays:

Minnesota was admitted as the 32nd state

The Packers are still in the hunt for Super Bowl 57. In Reduction, the word Perfection sums to 57.

Prince died on the Queen’s birthday. The Queen was born on the 111th day of the year:

The last game the Packers lost before they would have to go on a “perfect” run was to the near-perfect Philadelphia Eagles. Philadelphia is abbreviated PHI, like the Golden Ratio shown above.

This is the inverse of 433, the value of Solar eclipse in the same Latin cipher. The Packers play their home games at Lambeau Field.

The pitcher that died yesterday threw a “Perfect” game for the Cincinnati Reds.