This story about the Border crisis on November 11th, or 11/11, is connected to a recent controversy that rocked the world of Chess. The commissioner in trouble is named Magnus, which is the same name as the world’s #1 chess player from Norway.

Both U.S. Customs and Border Protection and its abbreviation U.S. CBP have gematria of 366.

Chris Magnus was born on the date leaving 66 days in the year:

It was also 317 days before his birthday, which is the 66th Prime number. It was on a date with Primary numerology of 66:

Magnus is being told to resign or be fired by DHS Secretary Alejandro Mayorkas.

66 is also the Reduction value of the number 33.

Today is 333 days after Chris Magnus took office and a span of 33 days before the anniversary of that date:

Consider how the world’s #1 ranked Chess Grandmaster is named Magnus – Magnus Carlsen from Norway, who was recently part of a cheating scandal against newcomer Hans Niemann. Niemann literally means “new guy in town.” U.S. Customs and Borders Protection tries to stop immigrants from becoming the new people in your town.

Today is 66 days after 9/6, which is when news broke that Magnus Carlsen had dropped out of the Sinquefield Cup in St. Louis, Missouri due to that controversy.

In the Latin method, the word Eclipse gives us an Ordinal value of 66.

When you write the number 66 out, it has Ordinal gematria of 149.

That eclipse passes directly over Normandy, Texas, which was the focus of FOX’s headline. 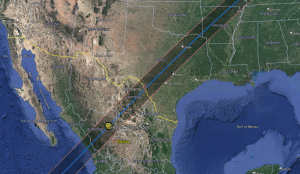 The Normandy landings fell on June 6th, or 6/6

It’s not quite the number 66…but Magnus’s boss, Mayorkas, has gematria of 662.

I frequently discuss the significant number 1331, as the 1331 eclipse occurred on November 30th.

Consider how a Total eclipse turns the Sun from white to black. The classic board game that pits white pieces against black pieces is Chess, the game that Magnus Carlsen rules the world in. He was born on November 30th: