Check below for her immense connections to the Moon.

Her death, not coincidentally, made the news the same day as the season premiere of WWE SmackDown .

The number Thirty-three has matching gematria with Tough Enough, WWE, and Wesley Blake.

News of her sudden death, and the date of WWE SmackDown’s season premiere, was 10/7.

The Moon has all sorts of matching gematria with Sara Ann Lee.

Those aren’t the only ciphers they match in.

That 304 is very familiar, isn’t it? Tua Tagovailoa’s injury in Cincinnati was COMPLETELY by the number 304 and the Moon.

She died on a date with Standard numerology of 38: 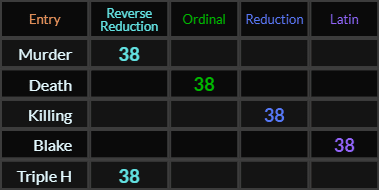 When she was announced as the winner, she was 79 days after her birthday and 8479 days old:

In Ordinal, Murder sums to 79 and 83, matching the Reduction values of her husband’s full name.

I thought it was interesting that new head of creative Triple H was out in the ring for the opening of SmackDown tonight.