In May of this year, I made this post about the numerology of the passing of Phantom, my cat since 2009. The main topic of that post is how her last day on this planet was the same day as a total lunar eclipse, which was rather fascinating. In 2018, I had made this other post showing how The Phantom of the Opera received a significant tribute for the Lunar eclipse in New York. 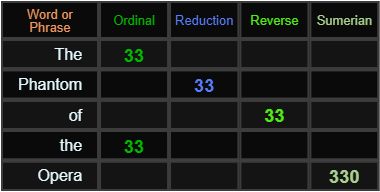 I’ve received a fair number of messages about my cat, mostly showing sympathy, but also expressing awe at the alarming synchronicity. Now that four months have passed, and I have repopulated my house with feline friends, another layer of the onion has exposed itself.

In English, Moon sums to 57, which is the number of degrees in its declination.

The final show will be on a date with Primary numerology of 63:

My cat died on a date with Primary numerology of 63:

The author of The Phantom of the Opera was named Gaston Leroux.

Gaston Leroux died on April 15th, or 4/15, which was the birthday of my ex whose house Phantom used to live at. My final bill at the vet in May was $415.

The date of Leroux’s death can also be written as 15/4.