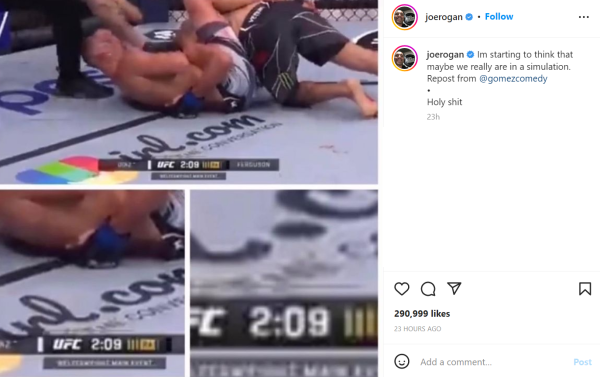 Why does the picture zoom in to the number 2:09? That’s the time at which Ferguson appears to have tapped out. Joe’s fascination with this number is because Nate Diaz is from Stockton, California, where the Area Code is 209:

What Joe does not divulge, however, is that this is the Latin gematria of UFC.

Nate Diaz got the win with 2:09 left the same day that Charles was officially proclaimed as King (more on this below).

The day before the fight was even 209 days after his opponent’s birthday. In numerology, the number 209 represents 29.

Diaz made it into the UFC by winning Season 5 of The Ultimate Fighter. This is the Capital letter gematria of Robert F. Stockton.

In Reverse, Nathan Donald Diaz has the same gematria as The Ultimate Fighter 5 and 279. Nate is the younger brother of fellow UFC fighter Nickolas Robert Diaz.

The number 279 is highly-significant this week for another reason.

On Thursday, Charles Philip Arthur George succeeded his mother on the throne a span of 279 days after the last Total Solar Eclipse:

His full name also matches the full name of the event.

He won The Ultimate Fighter in the year 2007. In the Latin method, Charles sums to 207.

Nate Diaz has Latin gematria of 660, matching King in the same cipher. Charles also has an Ordinal value of 66.

Stockton, California got its name from Robert F. Stockton, who died in the year ’66.

The number 66 connects to King and Diaz’s full name.

Both of his common names match King in Reduction.

This numerical riddle connected to the new King fell on a date with Standard numerology of 41: