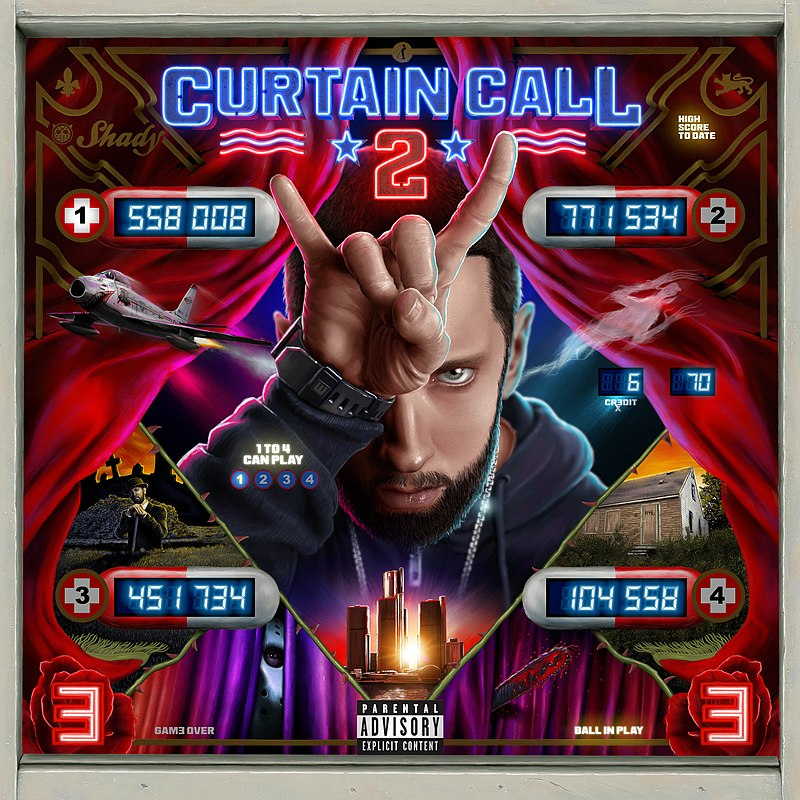 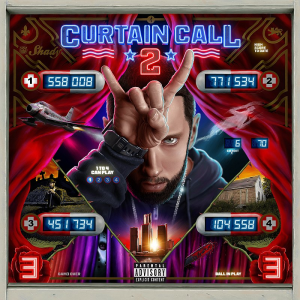 As I have documented in the past, EMIN3M is not just a man making his favorite music, but a brand that has been co-opted into a culture-steering propaganda machine. See my post on the numerology of a song he released promoting gun control in 2020.

EMIN3M‘s real name is Marshall Bruce Mathers, and his nickname is Slim Shady.

The cover shows Marshall with the famous one-eye symbolism, flashing the devil horns:

A number commonly-associated with the devil is 666. Some people consider the number of the Beast to actually be 616. The first single from this album, The King and I, was released on 6/16.

Learn why these numbers are so closely-associated with the Moon and Eclipses.

The Moon has a 57° range of declination. Below, you will see how this is connected to Super Bowl 57.

EMIN3M is wearing a Watch on the hand he’s using. Today’s release has Primary numerology of 55:

This is also the value of Slim in Reverse.

Today also has a Reduced / Life Lesson Number of 19:

Last week in my Discord, I theorized that the name Slim Shady was a reference to an eclipse’s path of totality:

The Sun is the 19th card of the Tarot. This number is strongly-coded into Eminem’s real full name.

This has been an important year for Mathers. In February, he and his adopted crew of west coast rappers headlined the Super Bowl halftime show, which was primarily coded around him.

This Greatest hits album is the first record he’s ever released that references his hometown of Detroit on the cover. The art features an image of the Renaissance Center.

The symbolism of the similar buildings with the Sun behind the Renaissance Center is a clear reference to the crucifixion of the Son of God:

173 upside-down is ELI, which Jesus yelled whilst on the cross:

The next Super Bowl is 57, and it will be played on a date with 57 numerology.

Many people believe Jesus was truly born on the 11th of September, or 11/9.

This is all actually quite a bit humorous when you consider how Marshall’s ex-wife’s name has 985 Latin gematria, matching Jesus.

She and Marshall “resurrected” their marriage for a month in 2006, when he was 33 years old. Jesus was believed to have been crucified at age 33 in the year 33 A.D. on the date of an Eclipse.

The album’s intials, C.C., represent 3-3 in gematria. This number appears to be coded into the bottom portion of the album art:

The names Marshall and Mathers both have numerology of 3.

The secret society named after Jesus the Messiah is The Society of Jesus.

1331 is the ultimate eclipse number. There’s one verse in the Bible that mentions both a solar and lunar eclipse, and it sums to 1331:

This verse is Revelation 6:12

The Eclipse code is highly-significant in Masonry, where the highest degree is said to be the 33rd.

In Ordinal, Masonry has matching gematria with both Marshall and Mathers, as well as his full name.

The album was released on the 5th of August, or 5/8, and again features Detroit, MI on the cover.

Freemasonry’s anniversary is traditionally recognized as June 24th. That’s the same date as the album’s second single, From the D 2 the LBC.

There sure are a lot of numbers on this cover. The four high scores are all words when turned upside-down – BOOBSS, HE’S ILL, HELISH, ASSHOLE. But when you actually add these digits together, you get a total sum of 92: 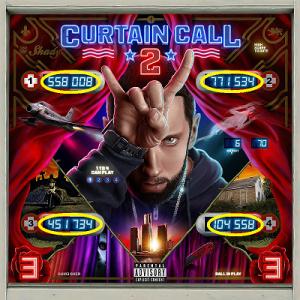 The first high score on his album begins with 558.

As I mentioned, this has been a big year for Marshall Mathers. The last name Mathers reminds me of Jerry Mathers, who played Beaver on the famous sitcom Leave It to Beaver. Jerry’s co-stars Tony Dow and Ken Osmond, who respectively played Wally Cleaver and Eddie Haskell, both passed away recently, with Wally’s death occurring just last week, leaving Jerry as the only surviving cast member.

The Beav is now 74 years old, and despite a diabetes diagnosis in the ’90’s, he seems to be in normal health. Let’s hope he has a lot of time left, but it will be interesting to see how his passing connects to Eminem once it happens.