McMahon’s middle name is Kennedy. I explained his myriad connections to the Kennedy assassination in this post from last year.

On the same day he retired, the entire police department in Kenly, North Carolina allegedly resigned:

Kennedy was the 35th President. Kenly is on the 35th parallel and 78th meridian:

Back in 2005, a wrestler named Ken Anderson made his debut for WWE. He was assigned the name Mr. Kennedy, and was given a very unique introduction where he would state his name, “Mr. Kennedy”, and then dramatically repeat it, to really drive it home. It’s basically what everybody knew him for. Numbers that stood out with him are in the bottom section.

An added layer of synchronicity appeared when Bo Jackson popped up in the headlines shortly after all of this. His real name is Vincent Jackson – recall how former WR Vincent Jackson died in connection to Super Bowl LV: 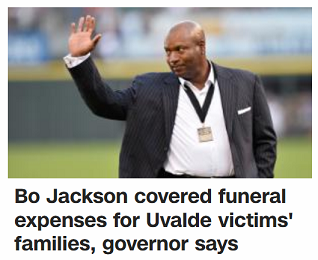 Bo Jackson was born on November 30th, which is the date of the Total solar eclipse in 1331, the most significant eclipse number.

News of McMahon’s retirement broke while it was July 23rd in Asia and much of Europe. On July 23rd back in 1994, McMahon was found not guilty by jury in a major steroid distribution scandal.

McMahon has matching gematria with both Kenly and North Carolina.

This is also the Reduction value of Total solar eclipse, which sums to 704 in Latin.

The Sun is represented by White, with the Moon turning it to Black. Look at the hilarious White/Black population of Kenly, North Carolina – 704 white people, and 503 African-American?

Those percentages even make up 47% and 33% of the population.

McMahon’s first two names, Vincent and Kennedy, both sum to 33 like the word Eclipse.

His retirement fell a span of exactly 33 weeks after the last Total solar eclipse, and 33 days before his next birthday:

It’s also exactly 3 years, 3 weeks after the last Total solar eclipse before that:

In the related story, the Kenly PD resigned, risking a loss of Order in the village.

The name Vince McMahon matches Eclipse in gematria. He’s accused of having $12 million in hush money paid out to keep his former affairs quiet.

Solar eclipse sums to 134 in ordinal.

With Vince stepping down, his daughter Stephanie will be taking over most of the executive responsibilities.

Although he was born in Wisconsin Rapids, Mr. Kennedy was billed as being from Green Bay, Wisconsin, something else he would emphasize during his introduction.

The billionaire princess’s name Steph sums to 22 and 383.