Cyclist Anna Moriah Wilson was killed on May 11th. However, this story out of Austin, Texas did not reach the national headlines until today, May 21st.

The woman who is accused of killing her is named Kaitlin Armstrong. This is noteworthy considering a man named Lance Armstrong is perhaps the most recognizable cyclist in the world. Lance, who changed his last name from “Gunderson”, was born in Texas, where Wilson was killed.

Although her name was Anna, her nickname was “Mo” for her middle name “Moriah”.

So what makes this a national story, and why did they wait so long to publish it?

The name Anna Moriah Wilson has gematria of 246 in Reverse.

The murder suspect is 35 years old.

Lance Armstrong was born on the 18th of the month. So was Anna Wilson.

In Reverse, Cyclist sums to 98, matching Lance Edward Armstrong with the S Exception.

The name “Armstrong” typically reminds people of Neil Armstrong, the first man to allegedly walk on the Moon.

Armstrong went to the Moon in an Apollo Rocket. This weekend, eSports juggernaut Rocket League is hosting a tournament called “Tour de Rocket League”, which is a pretty strange name considering it’s a game based on soccer:

Anna was 25 years old when she died. Exactly 25 years before her date of birth was also 666 days after the first Moonwalk.

Wilson was allegedly killed over her relationship with cyclist Colin Strickland, whom Kaitlin Armstrong was dating.

Anyone familiar with this blog knows that 1331 is the ultimate Eclipse number. This story out of Austin, Texas, made headlines on the date leaving 224 days in the year:

Austin is second to only neighboring Dallas as the largest city to be in the path of the 2024 Great American Eclipse: 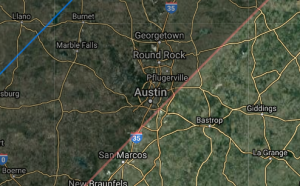 The word Cycling has matching 73 gematria with Solar eclipse.