Beginning in 1926, there was a highway in the southwestern United States called Route 666, a spur from the original Route 66 I covered in one of my last posts.

Although Route 666 went through four different states at one point, the only stretch of the road that was considered particularly dangerous was in New Mexico.

In 2003, New Mexico governor Bill Richardson signed a bill that changed the road’s designation from 666 to 491.

While 666 is considered to be the number of the Beast by most, some believe the number is actually 616. This all connects to the orbital velocity of the Earth, which is 66,616 mph: 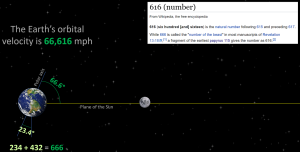 Richardson’s full name ends with III, indicative of a 666 riddle.

When the legislation was passed, he was quoted as saying:

In my post on the death of Neal Adams, I point out the connection to the Saros cycle, which is 18 years, 11 days in length.

The Route 66 tribute fell a span of exactly 246 years after the founding of the Bavarian Illuminati:

The film was released on a date with Primary numerology of 61: