This tragic story about the death of 14-year-old Tyre Sampson in an Accident at ICON Park in Orlando has been in the headlines for the past month. This is an example of how numerology manifests with in our matrix organically. We know this story was real as there is video of the entire incident (WARNING: Disturbing footage).

Tyre Sampson was from St. Louis, Missouri. Over a year ago, I made this post that explained how the city’s Gateway Arch was constructed as a tribute to last year’s two “Arch” Eclipses.

Tyre Sampson died shortly after the spring solstice, when the Sun‘s return to the north is celebrated. It was in the time of Aries, where the Sun is exalted. Sampson was a Leo, the only sign of the Zodiac ruled by the Sun.

Sampson was reportedly 360 pounds. In the Bible, the story of Samson is almost certainly an allegory for the movement of the Sun through the 360° Zodiac wheel. See this page for details. The centerpiece of this theme park in Orlando is called The Wheel, which opened on May 4th, written 5/4:

That approximation comes from NASA. Sampson was wearing NASA shorts on the day of his fall: 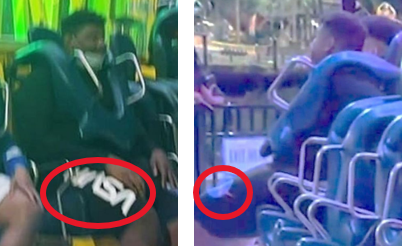 The media is comparing this accident to a similar 1999 incident when a 12-year-old died in the same fashion.

Joshua Smurphat was from Sunnyvale, CA, and died on a Sunday. He too was born as a Leo, and died on the last day of Leo, ruled by the Sun.

Smurphat was born in the year ’87

His name is fairly biblical – the city of Tyre in modern-day Lebanon is mentioned many times throughout its texts. Likewise, the book of Judges also tells the story of Samson.

The first verse of the Bible to mention Samson, which mentions that he was the Son of Manoah, sums to 415 in Reverse.

3/24 was the 83rd day of the year, connecting to the Football player’s Reduction gematria:

This year, the date had Primary numerology of 69 and 33:

69 and 33 are numbers connected to the Eclipse code.

That December 4th eclipse was the second of two aforementioned “Arch” eclipses in 2021.

Sampson was also born a span of 330 days after the last Annular Eclipse.