I’m expecting something noteworthy for Jackie Robinson Day today. This is the 76th season of integrated baseball since he started playing in the Major Leagues, following a time when black men were split off into the Negro Leagues.

Jackie made his Major League debut on a date with Alternate numerology of 76:

Robinson was portrayed in the film 42 by actor Chadwick Boseman, who was born in ’76:

In 2020, the pandemic forced Major League Baseball to move Jackie Robinson Day all the way back to August. Boseman died on that exact same day – a date with Primary numerology of 76:

The team Jackie played for, the Dodgers, would go on to win that year’s World Series. Today, the Dodgers play the Cincinnati Reds, who won the World Series in the year ’76.

The only other black man named Robinson in the Hall of Fame was slugger Frank Robinson, who played most of his career with the Reds before moving to the Orioles. Today, the Orioles play the Yankees, Jackie’s cross-town rivals whom he lost to in the World Series in his rookie season.

Although the Dodgers play in Los Angeles, they were still in Brooklyn during Jackie’s playing days. Earlier this week in Brooklyn, we had the death of comedian Gilbert Gottfried, who was born in Brooklyn while Robinson was still with the team.

The current coach of the Dodgers isn’t named Robinson, but his name is Roberts. Dave Roberts was born in 1972, the same year Jackie died. If he gets a win tonight, it will be his 547th career victory for the team based in Los Angeles, California.

The Dodgers moved to California the year after Robinson retired. In that state, the police homicide code is 187:

I glanced at the news right after finishing this post and saw Breaking News of a police shooting. Three officers were allegedly shot, and we know how this number is used as a clue that something is afoot: 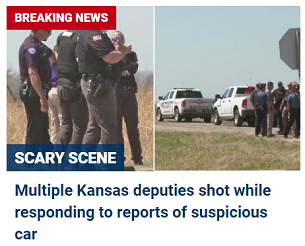 The state of Kansas is particularly interesting because Jackie Robinson played his one and only season in the Negro Leagues with the Kansas City Monarchs. This shooting was on 122nd Street.

Governor Kelly’s middle name is Jeanne. Earlier today, I made this post on the death of former Islanders player Mike Bosey, whose middle name might be Jean: