My last post explained how yesterday’s Masters victory for Scottie Scheffler was connected to Super Bowl winner Matthew Stafford, as both men went to the same high school.

That high school was in Dallas. The same day that Scheffler won the Masters, former Dallas coach Gary Brown died following a battle with cancer:

Scottie Scheffler was born on the 173rd day of a leap year:

Scheffler has birth numerology of 52 and 123:

Although noted for his time coaching the Cowboys, Brown was actually a coach at the University of Wisconsin at the time he died. This is significant for two very big reasons.

First of all, the current head coach of the Dallas Cowboys is Mike McCarthy, who led Wisconsin’s professional football team, the Packers, to a victory in Super Bowl XLV.

Secondly, Brown’s middle name was Leroy. Later this year, former Packers’ safety LeRoy Butler will be inducted into the Hall of Fame.

Dallas, Texas has matching 118 gematria with Wisconsin, a number associated with Death.

I was able to catch on to this big Golf-Wrestling riddle before it happened. See my post from last month on how Hulk Hogan is connected to The Masters. Hogan was part of the New World Order with Scott Hall, whose death was also connected to WrestleMania and the Hall of Fame.

Scottie Scheffler remarkably four-putt on his final hole, meaning he would end the round with a 71. Halfway through the tournament, a Steelers quarterback trying to replace Ben Roethlisberger mysteriously died.

On the date of Scheffler’s win, when Gary Brown died, Mike McCarthy was exactly 701 months (or 58 years, 5 months) old: 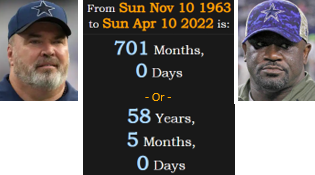 The Cowboys’ logo on their hats is a Star.

Gary’s last name was Brown. His first coaching job in the NFL was with the Cleveland Browns. The Brown House in Munich, Germany, was the headquarters of the Nazi Party.

The Nazis’ paramilitary group was called the Schutzstaffel. The Schutzstaffel was famously abbreviated S.S. These are the same initials of Scottie Scheffler, the winner of the Masters, whose last name is decisively German. The name Scheffler matches The Nazi Party and its full official title.

During the Masters, quarterback Dwayne Haskins died in another bizarre story where he was walking on the freeway before 7 in the morning. His passing was connected to the retirement of Ben Roethlisberger, whose name is about as German as it gets.

Augusta, Georgia is situated on the 82nd meridian:

The date leaving 82 days on the calendar is October 10th, which is directly across the calendar from the final day of the Masters, April 10th:

The Nazi Party officially dissolved on October 10th in the year ’45:

Brett Favre was born on a date with Primary numerology of 45:

When McCarthy became the head coach of Green Bay, their quarterback was still Brett Favre. Notice how Favre’s birthday is October 10th, the same date the Nazis dissolved:

The rise of the Nazi party meant a replacement of the German welfare system, which had existed since the Industrial Revolution. The same day that Gary Brown died, Favre was back in the news, this time at the center of a massive welfare scandal:

Favre was born exactly 288 months after the end of the Nazi Party. 288 is Par for the 4 rounds at the Masters. Favre wears #4, which is like Fore, what golfers yell when they hit a bad shot. It also has matching numerology with the Ordinal value of Golf.

This is his former coach Mike McCarthy’s Life Lesson number:

LeRoy Butler was 2803 weeks old when Brown died 283 days after his own birthday:

Notice how LeRoy Butler is a third, indicated by the III after his name. This virtually always means there is a 666 riddle involved.

Mike McCarthy was born a span of 6606 days after the Nazi Party dissolved, while Gary Brown’s birth died 8,666 days after that same date:

The number 666 is connected to 294 in gematria in multiple ways.

McCarthy was born 294 weeks before Gary Brown, and had been the coach of the Cowboys for 2 years, 94 days when he died:

666 is known as the number of the Beast.

The 198 value matches the full names of both Gary Brown and LeRoy Butler, who is from Jacksonville, Florida.

The gematria of Six six six even matches Gary Brown and Schutzstaffel.

Leroy Butler III retired with a total of 989 career tackles.

Brown’s death fell 27941 days after the Nazis disbanded and exactly 3048 weeks after McCarthy was born:

In that same Reverse cipher, Brett Favre sums to 918.

918 has the same digits as Mike McCarthy‘s full name.