There’s been a couple of controversies surrounding the nomination of Ketanji Brown Jackson as the next Supreme Court Justice. One of those involved her record on child sex crimes:

Another one was her inability to define what a “woman” was:

These are both relevant to the King of Pop, Michael Jackson, who spent a lot of time in court defending himself against charges of sex crimes against children. As he aged and went through several major surgeries, he grew increasingly androgynous in appearance.

Michael Jackson was born on the date leaving 124 days in the year, which was the 241st day of the year:

Ketanji Jackson was confirmed on a date with Primary numerology of 53:

Michael’s doctor Conrad Murray was a Grenadian who was born in the year ’53.

Ketanji Brown Jackson was born in 1970. This syncs up with the most famous Jackson in pop culture’s history, Michael Joseph Jackson, who was born on August 29th, or 29/8.

Jackson was confirmed a span of 4670 days after the death of Michael Jackson, and a span of exactly 3319 weeks after he was born: 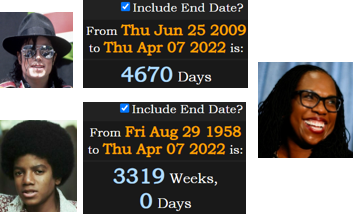 Today has Standard numerology of 33:

The man who was accused of killing Michael Jackson was Conrad Murray, who is currently 69 years, 47 days old here on 4/7: