In 2021, I made this post which explained the numerology of Tiger Woods’ fake car accident on his way to Riviera Golf Course. See my follow-up post from the next day.

Unsurprisingly, Tiger is now making a “miraculous” comeback during the year of the Tiger, as he prepares to participate in the Masters tournament beginning this week. It’s truly astonishing how few people have caught on to just how fake our news is.

In my first post today, I covered the numerology of the Jayhawks‘ win over the North Carolina Tar Heels in last night’s NCAA Championship game. When writing that post, it quickly became clear to me that their comeback win over UNC was a riddle connected to Tiger‘s comeback at the Masters.

Tiger’s Comeback will fall on a date with Primary numerology of 53:

This year’s Masters starts on the 97th day of the year, which is the 98th day of a leap year: 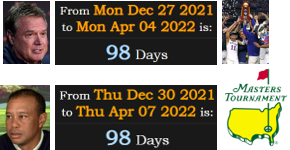