This story is heavily-connected to the Eclipse Crucifixion code. The name Bethel reminds us of Bethlehem, where Jesus was born. Bethel means “a place where God is worshipped.” Zoe Bethel was very public about her support for Jesus: 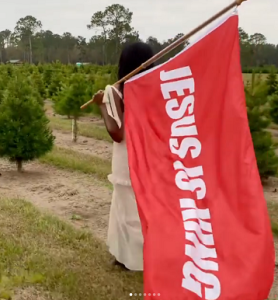 Jesus, the son of God, is a symbol of the Sun, whose Magic Square sums to 666:

Most believers think Jesus was crucified at the age of 33 in 33 A.D.

3300 months on a calendar equates to exactly 275 years. This is the Ordinal gematria of 666. This is a significant eclipse number, as we will see more on below.

Kamala Harris is the 49th Vice President in the history of the United States.

Miss Alabama allegedly died from an Accident on the 49th day of the year:

The date February 18th also leaves 316 days on the calendar:

Perhaps the most well-known Bible verse that explains why Jesus was sent is John 3:16:

The number 173 upside-down is ELI. This is what Jesus cries out while on the cross:

This excerpt is from Matthew 27. Zoe was 27 years old. Notice how the preceding verse mentions how darkness fell over the land during the crucifixion. Matthew is one of the three gospels that alludes to an eclipse at this time:

Zoe won her Miss Alabama contest on a date with 13 and 31 numerology:

The numbers 21 and 201 are significant to The Jesuit Order. The Vatican is currently led by the first Jesuit Pope, Jorge Mario Bergoglio, who has the same 201 gematria as the Society’s founder, Ignatius of Loyola.

Global vaccine advocate William Henry Gates has matching 201 gematria with Eclipse code. On December 14th of 2020, the first approval for emergency usage of the COVID-19 was granted. That was the same date as a Total solar eclipse that centered over Argentina, which is Pope Francis’s home nation.

That Eclipse was at the exact halfway point between the two Great American Eclipses. Alabama’s state flag is just a red X, reminding us of the paths of those two eclipses:

In Reverse, the word Crucifixion sums to 166.

Bethel was born on the 293rd day of the year:

She died on a date with Primary numerology of 62:

The accident she died from occurred on 2/11