Last month, Major League Baseball held its round of annual voting to select the 2022 Hall of Fame class. The news of who was selected, however, was almost overshadowed by who didn’t make it.

Two of the most legendary players to ever take the field – Barry Bonds and Roger Clemens – both missed their last chance to make it in:

Why will their bronze busts never be enshrined into Cooperstown? Bonds and Clemens were two of the most famous names listed in the Mitchell Report, which was an investigation launched by former commissioner Bud Selig and published in December of 2007. Former senator George Mitchell alleged that nearly 100 Major League players had been involved in a widespread doping scandal for several years, unofficially nullifying their achievements and tarnishing their names.

Giambi died on the 40th day of the year:

This is the Ordinal value of his brother Jason’s full name.

This number is also found in the gematria of Bud Selig, who commissioned the Report.

Jeremy’s full name even connects to this number.

These are the same four digits found in the Primary numerology of the date he died:

Jeremy was born on a date with Primary numerology of 132:

Jeremy Giambi was born in ’74

The highest degree of Masonry is believed to be the 33rd.

George Mitchell was born in the year ’33. Jeremy Giambi had Reduced birth numerology of 33:

The date he died had Standard numerology of 33:

The lab that Mitchell focused his efforts on was called BALCO, which ended up keeping several players out of the National Baseball Hall of Fame and Museum.

Jeremy Giambi died in connection to the Mitchell Report on the date leaving 325 days in the year:

Jeremy’s brother Jason has gematria of 632, which is the Jewish value of Performance enhancers. But more important is that Ancient Accepted Scottish Rite of Freemasonry sums to 632. and 1866.

Jeremy Giambi was a relatively mediocre MLB player. The play he is best known for was not even a play he made – it was this one made by Derek Jeter: 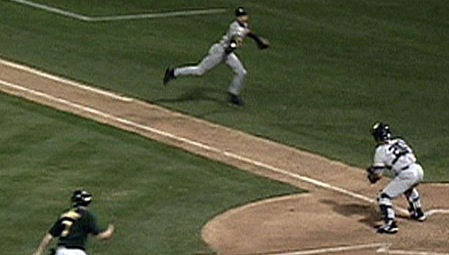 That’s Jeremy on the bottom of the screen, about to get thrown out. I found it pretty intriguing that he was 1410 weeks old when this happened, the number that connects his name to Baseball:

In that same cipher, his brother’s full name sums to 1062, which is of course another massive Baseball number. The league plays 162 games per season.

Jeremy, who died on February 9th or 9/2, was born on the date leaving 92 days in the year:

The Mitchell Report was released on a date with 34 and 52 numerology: